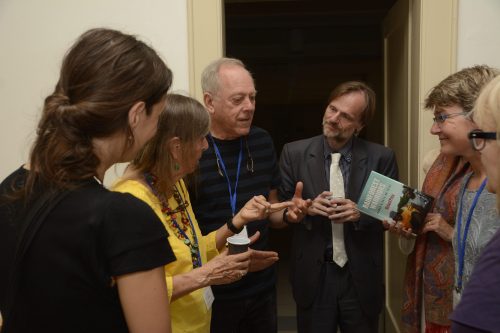 The aim of the event was to bring attention to the phenomenon of modern slavery as a constitutive part of the process of European modernisation, economic globalisation, but also as an unsettling moment which was constantly present in the works of religious reformers and Enlightenment scholars in the Atlantic area.

The organisers have succeeded in securing many prestigious guests and so the conference was opened by Richard Price, one of the leading figures in the field of slavery research, its historical legacy and current issues the Afro-American population is facing in the broader Caribbean area. His lecture dealt with the topic of Maroons, descendants of run-away slaves in various regions of the New World. The lecture was broad in nature since it was aimed at the attendees of the conference but also students and the academic public who might not be that familiar with the topic. This was followed up by Sally Price, not only Richard Price’s partner, but most importantly a research collaborator, with a presentation about the problems and challenges of studying Maroon art from the point of view of art history and anthropology.

The rest of the programme was more narrowly focused. The lectures dealt with various aspects of slavery and its material and intellectual consequences on the European society of the 18th century. José Nafafe introduced the complicated position of slavery in the European religious and secular law through a case study; Andrea Livesey (University of Liverpool) and Richard Stone (University of Bristol) discussed the relationship of Enlightenment scholars to slavery and the problematic legacy of this sponsorship in today’s academia; Tomáš Kunca (FH CU) presented the opinions of some Scottish Enlightenment philosophers on slavery, Markéta Křížová (FA CU) discussed the impact of slavery on the central European region. In the final lecture, which was again public, Madge Dressler (University of Bristol) talked about the current state of remembering slavery in the public space.

The PhD programme panel contained research presentations from Lenka Philippová (FA CU, the topic of Rastafarians in Jamaica), František Kalenda (FH CU, the topic of religious justification and defence of slavery in imperial Brazil) and Stephanie Vogel (Aarhus University, the topic of reflections of slavery in the gothic novel). A roundtable discussion took place on the final day of the conference where the participants discussed the potential of African studies in the current European university system. The Centre for Black Humanities (University of Bristol) and the Centre for African Studies (FA CU) were introduced.

Thanks to the “book display”, the attendees were able to get acquainted with the publications of the participants throughout the entire conference. (Some of the books were then donated to the Library of the Department of Ibero-American Studies FA CU.) As a part of the accompanying programme an excursion to the Náprstek Museum of Asian, African and American Cultures took place.