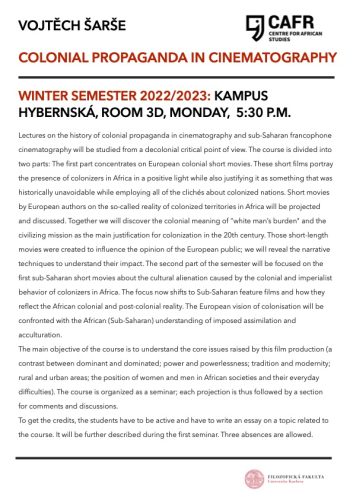 “Lectures on the history of colonial propaganda in cinematography and sub-Saharan francophone cinematography will be studied from a decolonial critical point of view. The course is divided into two parts: The first part concentrates on European colonial short movies. These short films portray the presence of colonizers in Africa in a positive light while also justifying it as something that was historically unavoidable while employing all of the clichés about colonized nations. Short movies by European authors on the so-called reality of colonized territories in Africa will be projected and discussed. Together we will discover the colonial meaning of “white man’s burden” and the civilizing mission as the main justification for colonization in the 20th century. Those short-length movies were created to influence the opinion of the European public; we will reveal the narrative techniques to understand their impact. The second part of the semester will be focused on the first sub-Saharan short movies about the cultural alienation caused by the colonial and imperialist behavior of colonizers in Africa. The focus now shifts to Sub-Saharan feature films and how they reflect the African colonial and post-colonial reality. The European vision of colonisation will be confronted with the African (Sub-Saharan) understanding of imposed assimilation and acculturation.”